An Australian business set up by two entrepreneurs Dr Ross Headifen and John Mancarella is leading the world in making every day plastic items able to biodegrade away when disposed to landfills. The idea back in 2008 from Ross seeking a solution for a heavily used single use plastic item to sample ground water, has grown into a small and growing multinational business called Biogone. In 2008 Ross sold a company that supplied equipment for groundwater sampling and monitoring.  The company supplied a lot of single use plastic items to its customers as they could not afford the risk of reusable equipment cross contamination sites.

However, like any other single use plastic, once used they were disposed of to landfills.  Ross started questioning the validity of process.  Groundwater contamination was being cleaned up, but at the cost of making piles of plastic items that would still be around in 300-500 years.  That did not make sense and Ross started looking for more responsible ways to make this equipment.  After 2008, Ross and his wife spent two years volunteering in Tanzania putting in water wells in rural villages.  During this time, they noticed the large amount of plastic bags and bottles lying around.  Tanzania had no infrastructure to manage plastic rubbish.   Seeing this reinforced to Ross that a better solution for plastic waste had to be found. 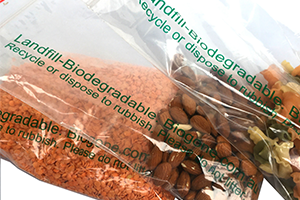 Upon returning, Ross researched the internet to determine if others had found any solutions that were practical to implement.  He found technologies such as oxo-degradable where an additive was added to the plastic to make it fragment into little pieces over 12-18 months.  After reading numerous reports on this it became clear this was more of an out of sight out of mind technology and could be worse for the environment to make this plastic soup of tiny pieces of plastic flowing around.

Ross also researched compostable plastics made from plants.  This was an emerging technology back then and was being promoted as the solution to oil-based plastics.  However, it became clear there were numerous limitations to this material.  For it to biodegrade it needed a commercial compost facility with special conditions of high temperature, lots of fresh air and constant moisture.  These are the conditions needed for the biodegrading bacteria to live.  If those conditions are not maintained, the microbes die off and the compostable plastic will not biodegrade.  From an end user point of view, this was not acceptable as the end user could not be expected to dispose of their compostable waste to such a special facility.  These commercial compost facilities are not very common and are still not to this day either.  Other limitations of the inability of the composting process to capture the embodied energy of the plastic seemed a waste of energy.   The compostable plastics are not recyclable either so after their use they had to be disposed of.  This also seemed a waste, this time, a waste of resources.

In one of the papers Ross was reading in 2010 he came across a little foot note that mentioned a USA technology making a plastic able to biodegrade in landfills.  This led to another search to find this company.  This technology was something new.   They were adding a special inert organic additive to the raw plastic mix.  This additive was a food source for the naturally occurring microbes in a landfill.  Plastic can be considered as a form of solid energy.  The reason why it cannot normally be biodegraded down is the molecular bonds in the polymer chain are strong and stable.   The microbes normally cannot get access to the atoms and their energy.  However, when this food additive is added to a plastic, the microbes seek out the food and start to digest it.   The enzymes they secrete in that process can break down the surface of the plastic allowing the microbes to access the top atoms and their energy for food.  This process goes on until the plastic has been biodegraded all the way through.

While this is not a fast biodegradation process like we think of for a piece of paper or such, it brings out some other interesting and beneficial factors:

This process can occur in a landfill as well.  It does not need composting conditions.   Currently about 85% of plastic is disposed to landfill so being able to make it go away there is a large advantage.  It means consumers can dispose of their plastic waste normally yet know it will no longer be around for 100s of years.  Biodegradation in a landfill produces methane which modern landfills capture to generate electricity which is called green power as it displaces coal power.  Landfills want to capture a constant supply of methane over many years which is what a biodegrading plastic offers, making it a good economic fit.

The additive used is inert and added in in a very small amount.  Hence it does not change the properties of the plastic for any product design considerations.  This means the plastic is fully mainstream recyclable as well.

Only a small amount of additive was needed, hence it could be mixed in with the conventional raw plastic pellets just as a colourant would be added in.  This meant the product manufacturers could use the additive to make biodegradable versions of their products without have to change any of their machinery.

The technology that Biogone employs allows a plastic to biodegrade way, produce energy to displace coal, can be fully recycled and does not require any special disposal methods.

This additive had some very desirable properties. The first step however was to trial the additive to check if it did run in the manufacturer’s machines.    Samples were obtained and supplied to different product manufacturers to trial making their products with the additive in it.   They all reported they noted a slight change in how the plastic ran in the machines but overall, it ran well and did not change the quality of their product.

In 2012 Ross and John started a company Fieldtech Solutions supplying equipment to the contaminated land industry.  One of the goals in this company was to replace all the conventional single use plastic being used in this industry with a landfill-biodegradable version of it.   Plus, to further their sustainability, they would have their more long-life products out of recycled plastic resin.  Australian, when possible and then international manufacturers were found to make an array of products for their company.  All these products were not only Australian firsts but were world firsts.   When they were announced they caused considerable discussion in the industry.   Why hadn’t this been done before?  How did this work?  Were they too expensive?  These are common questions they got asked over and over.  Some companies immediately made the switch to become more responsible with their operations.   There were some however who decided for their own internal reasons to continue to make all the same plastic waste they had always made.

As the company grew, Ross and John soon realised to be fully responsible they had to consider the packing materials they were using to ship their products out to customers.  They contacted various companies making these items and first inquired if they would be interested making some of their products with the additive.  A lot of questions and answers were sent back and forth.  In the end some said no as they said they didn’t want to risk their machines on something new. Some however did say yes, they would do some trials.   Trials were performed and production orders placed soon thereafter.

Understanding that every business in Australia that sells products would have the same issues as Fieldtech Solutions had, John and Ross then decided to take the idea bigger. They would not only use the packing in Fieldtech but would form another entity called Biogone and market the range of packing materials across Australia. These products were also the first of their kind in the world.  Product like packing tape that scarcely anyone gives a second though to as being plastic problem, but in reality, is just another piece of polypropylene film that would last 100’s of years.   Finding a manufacturer to run a trial with the additive was a considerable problem and took over 2 years.  However, one supplier was willing to perform the trial which went well.  They then produced the world’s first landfill biodegradable for Biogone.   Similar product followed along, stretch wrap, pallet caps, packing envelopes, each one a first.

As a new product was made it was added to the Biogone website and listed for sale.  Once the packing range of products reached a comprehensive level, the 2 entrepreneurs looked around at what other industries were using a lot of single use plastic with general consumers as the customers.  The food industry was a prominent industry to consider.   They started off small with a range of zip lock bags, then expanded to cling films, disposable and reusable gloves, bin liners and produce bags.   By this time, about 2017, there were starting to appear on the market some landfill-biodegradable products from other companies sch as zip lock bags.  A USA company had just released a line of disposable gloves and asked Biogone to represent them for some of their market.   The cling films and produce bags were still world firsts landfill-biodegradable versions, however.

Still other markets became apparent.  The dog waste bag industry was large with numerous manufacturers competing for sales.  Some had biodegradable claims on them without any justification as to how they would biodegrade.  John and Ross decided to produce a line of dog bags but with all the information on them to let the users know what the bags were and how and where to dispose of them.   This seemed to be garnered some respect from users as sales grew fast.

All through the last ten years, the world’s media have focused more and more on the problems with plastic waste.  It gets into the oceans, take a dire toll on marine life, pollutes the lands of many third world countries to devastating levels, impacts infrastructure causing flooding, and disease.  This has led to consumers being more aware of their plastic usage and looking for better solutions.   Ross and John were fortunate to have started and promoting Biogone throughout most of this to offer consumers more responsible solutions.   There is no perfect plastic solution however other than refuse.   To add to their product material range, they started having some of their products made from Home Compostable plastics.  This material has gained more prominence in the last five or so years with consumers wanting to get away from fossil fuel-based plastics.  In addition, there is an Australian standard for it which gives consumes a lot of confidence they are getting the right material.  To verify that a home compostable plastic product would biodegrade in a landfill, where a consumer is likely to dispose of it, a biodegradation test was performed by a laboratory with very positive results.

The company Biogone they started 13 years ago based on a footnote in a journal article, now has 11 staff and has developed a large suite of responsible plastic products encompassing both the landfill-biodegradable range and a similar range of home compostable products.  All of which will biodegrade when disposed on in the typical manner these products are disposed of.   Their biogas from the decomposition can be used to generate electricity.  Some of which are recyclable should we get to a more circular economy in the years to come.